Get a free seed with every pack of sweet seeds

The more you spend the more free seeds! Choose from the autoflowering bundle, the non-auto bundle or a mix of both.

Cannabis plant gender is a very important area of interest to collectors of cannabis genetics. Cannabis plants are either male or female. The male plants produce pollen which pollinates the flowers of the female plant, which once pollenised, produce seeds. If the female plant isn’t pollenized (if there are no male plants nearby producing pollen), the flower/buds continue to develop and produce THC. Female plants which are not pollenized are referred to as sensemilla (without seeds). If a female cannabis plant is not pollenised it puts more effort into producing buds and excess resin. 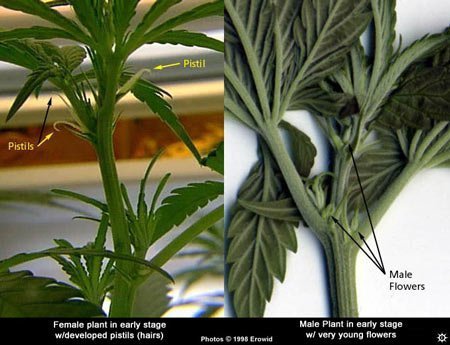 More in-depth information on the gender of marijuana plants

Female Pistils – notice the sac and the feathery frond-like structure. Usually after five days to two weeks you will begin to see a pair of tubular nodes. Hopefully they will have white hairs protruding from them as this denotes a female plant. These little hairs are known as pistils and they are the first sign your plant is flowering.
Female Cannabis – The female cannabis plant, unlike the male, is grown to produce marijuana. Premium marijuana is produced in seedless form by eliminating all pollen sources from the growing environment. Seed production reduces the value of marijuana dramatically by lowering the yield and potency of the flowers.
The female flowers appear as two long white, yellow, or pink pistils protruding from the fold of a very thin membranous calyx. The calyx is covered with resin exuding glandular trichomes (hairs). Pistillate flowers are borne in pairs at the nodes one on each side of the petiole behind the stipule of bracts which conceal the flowers. The females are recognized by the enlargement of a symmetrical tubular calyx (floral sheath). They are easier to recognize at a young age than male primordia. The first female calyxes tend to lack paired pistils (pollen-catching appendages) though initial male flowers often mature and shed viable pollen. In some individuals, especially hybrids, small non-flowering limbs will form at the nodes and are often confused with male primordia. The female plants tend to be shorter and have more branches than the male.

Sign up to keep up to date with our latest news and offers.