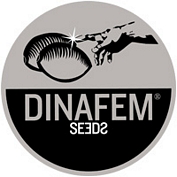 Dinafem is one of the worlds biggest seed banks which produce a massive range of auto flowering and photoperiod cannabis strains. The Dinafem seed company have developed an exceptional range of cannabis seeds including blue widow, moby dick and critical mass. As well as having developed a great range of seeds, Dinafem have invested in a superb seed storage system which incluse a protected vial inside a metal tin which insures your seeds will stay safe. This seedbank is based in Spain and uses the countries near year-around sunshine to test its genetics indoors and outdoors. Their big yielding auto flowering strains such as Moby Dick XXL have really been causing a buzz on the forums of late and their classic strains such as original Amnesia are a must have strain for every cannabis seed collector.